President Donald Trump and Democratic nominee Joe Biden will have their microphones cut off during portions of the final presidential debate.

Kristen Welker will host the final presidential debate showdown Thursday, though it appears that President Donald Trump may spar with her almost as much as he will with his Democratic rival, Joe Biden.

The NBC News White House correspondent and “Weekend Today” co-anchor will moderate the debate at Belmont University in Nashville (9 EDT/6 PDT). The second presidential debate was axed after Trump declined to participate virtually, following his COVID-19 diagnosis. Instead, he and Biden held dueling town halls , and the former vice president beat Trump in the Nielsen ratings.

Welker, a target of Trump’s Twitter rage last week, will be the first Black woman to moderate a presidential debate in nearly 30 years. (Journalist Carole Simpson moderated the face-off between George H.W. Bush, Bill Clinton and Ross Perot in 1992.)

Here are five things to know about Welker:

The final debate could be Trump’s last chance to turn the race around: He’s already attacking the moderator

Her journalism career: Welker, 44, studied American history at Harvard and interned at “Today” in 1997. Before beginning her full-time NBC News tenure in 2010, Welker worked for local TV stations in Providence, Rhode Island; Redding, California; and later Philadelphia, her hometown. In 2011, she became a White House reporter and reported on the 2016 presidential election. She was named “Weekend Today” co-anchor alongside Peter Alexander last January.

The foursome were praised for the performance. “Even when the debate ran longer than the scheduled two hours, it was not only interesting, but entertaining,” wrote Tom Jones on Poynter.org, a journalism website. “The moderators get credit for that. As a result, we had the most stimulating and substantive Democratic debate so far in this election cycle.” 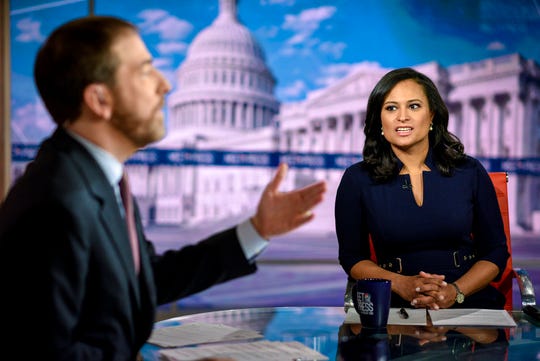 What inspired her to become a reporter: Welker was one of eight Black journalists Glamour sought out for a story, published in June, to uncover what life is like for reporters amid a fight for racial equality and a global pandemic,.

Welker’s mother is Black, and her father is white, so “growing up as a biracial child, the idea of helping people of different races and backgrounds better communicate inspired me to become a journalist,” she  told the magazine. “With protesters demanding change after George Floyd’s death, it is more important than ever that everyone has a voice and elected leaders from the White House to City Hall are held accountable for their words and actions, or lack thereof.”

Her mom is her No. 1 fan: Welker is one of the participants who shared “The Best Advice My Mother Gave Me” for a Mother’s Day piece published on Maria Shriver’s website. She describes her mom, Juliet Welker, as “my biggest supporter, my best friend, and my greatest inspiration.” Welker said her mom, who was the first Black president of the women’s student association at Penn State University, instilled in her the importance of believing in oneself.

“From the moment I told my mother that I wanted to be a journalist, she has stood by my side every step of the way,” Welker wrote. “My mom texts me after every single live report to cheer me on. I would not be the person or journalist that I am today if it were not for my mom.”

“Saturday Night Live” showcased the extreme differences in the President Trump and Joe Biden town halls by including Mister Rogers and “WrestleMania.”

Trump’s criticism: In January, the president congratulated Welker on nabbing the “Weekend Today” hosting gig at a news conference. “They made a very wise decision,” he said. But last weekend, , he abruptly reversed course, firing off a tweet bashing her. (He’d also criticized Fox News’ Chris Wallace, who moderated the first debate, and NBC’s Savannah Guthrie, who moderated last week’s town hall.)

“Yikes! Here we go again” Donald Trump Jr. commented on a New York Post story highlighting her alleged “deep Democratic ties” by citing her family’s donations to some of the party’s political candidates. The president piled on: “She’s always been terrible & unfair, just like most of the Fake News reporters, but I’ll still play the game,” the president posted. “The people know!”

‘South Park’ pandemic special has everyone talking. Here’s why

What Netflix TV Stars Look Like In Their First Major Role Vs. Now

[ad_1] The cast of Grace and Frankie was iconic then and now. 1. Christina Apple…