With the Galaxy S20 5G, Samsung is doing more than just turning it up to 11.

What’s striking about Samsung’s new flagship smartphone isn’t just the model number leapfrogging from 10 to 20. With 100x zoom, 108-megapixel sensor and 8K video, the specs for the Galaxy S20 5G family are also much larger than its predecessors. And, for that matter, than competitors like the Apple iPhone 11 and the Pixel 4 from Google.

Indeed, though smartphone makers have added cool new features, the underlying camera technology has held constant, with 12MP cameras and 2X optical zoom. Which begs the question: Is the S20 for real? Or is Samsung just turning it up to the proverbial 11, and calling it 20?

To be sure, Samsung isn’t just playing a numbers game. In fact, Chinese suppliers like Huawei and Xiaomi have already begun making smartphones with four rear-facing cameras and mega megapixel counts. Here in the U.S. market, though, the S20 camera system is a game-changer, and a harbinger of things to come for at least the next few years. 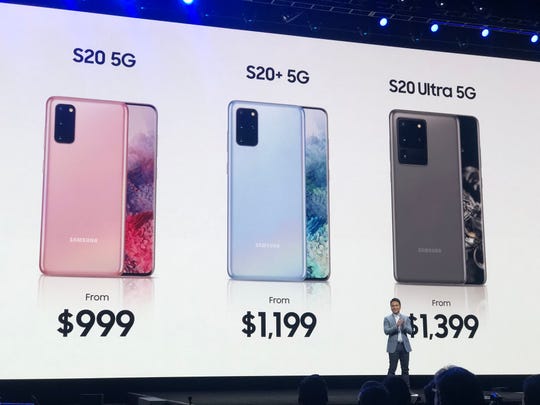 With these new camera architectures coming to store shelves – the S20 family goes on sale March 6 – gauging quality is going to be different. So toss everything you think you know about smartphone cameras. And read on for some pointers to help you navigate the phone aisle in 2020:

All else being equal, the more pixels at your disposal, the truer the image. Except that all else isn’t equal.

In order to pack more pixels into a fixed space on a sensor, the elements must be minuscule. Smaller pixels collect less light, which yields blurry, grainy low-light images. Smartphone makers have settled on 12MP cameras as a happy medium between photo quality and low-light performance. As a measure of its staying power, all three S20 variants have at least one 12MP camera in their three- and four-lens camera arsenals.

Samsung’s $1,400 smartphones: What’s up with the new sky-high pricing?

At the same time, Samsung has broken through with new, larger sensors that enable dramatically higher pixel counts. Samsung co-developed the 108MP sensor with Xiaomi, which introduced it as part of a five-camera package in a high-end phone late last year.

For even better low-light photography, Samsung is employing a technique called pixel binning, which bundles elements together as one, to pool the light. With the S20 Ultra, Samsung is the first to combine nine pixels into a single light-quenched element. That should result in impressive low-light photos.

The S20 Ultra is also the first smartphone to offer 100x zoom. Speaking of which …

If low-light performance is one Achilles heel of smartphone photography, then quality magnification is most assuredly the other. Smartphone makers don’t have the luxury of adding big DSLR-like lenses into their thin, flat frames. So they have to resort to other means.

The easiest method is with digital zoom, which essentially stretches a portion of the field of view. That necessarily means sacrificing quality, though AI and other techniques help mute the degradation.

The second method is by adding a telephoto lens. There’s no loss of quality. But it’s costly to add more sensors. Plus, they take up room that could be used for other things, like larger batteries. 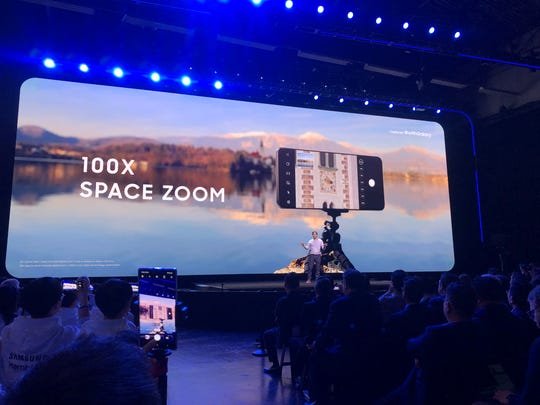 With the S20 family, the focal lengths of the two lenses are essentially the same, which makes optical zoom, as traditionally measured, effectively zero. Yet the phones deliver 3x zoom (10x with the Ultra) with no image quality loss. Samsung achieves this so-called “hybrid optical zoom” with a foldable optical lens to extend the effective focal length, along with a sensor crop of the resulting closer-range image.

So how do we get beyond the lossless 10x hybrid optical to 100x zoom? For that, we need digital zoom, which means picture quality suffers. Still, 100x zoom on a smartphone is quite an achievement. Samsung makes it possible by leveraging the S20 Ultra’s other lenses along with the camera’s built-in anti-shake features. And AI, of course.

Speaking of the other lenses …

How many is too many?

Smartphones got by with a single camera until about four years ago, when optical quality hit the 12MP wall. To continue onward, most manufacturers added a second lens to handle either zoom, wide-angle or close-up. HTC added a depth-sensing lens for background blur. And Huawei for a time even went with a black-and-white lens.

The tri-camera emerged in 2018. Last year, the first four-lens cameras – and even Xiaomi’s five-lens model – first appeared, mostly from Chinese vendors. And this year, with the S20, quad-camera comes to the West.

Not everyone embraced the trend. Apple waited until this fall to add a third lens. And a few months ago, Google finally succumbed, adding a 16MP telephoto lens to accompany a lonely, hardworking 12MP main sensor.

The multi-lens camera is here to stay. But no one knows for sure how far it will go. Given the design trade-offs, I suspect they’ll hold firm for a while at four or five lenses, affording manufacturers time to grow into them. As well, I expect pixel densities to plateau at these new higher levels.

In the meantime, watch for year-to-year quality gains to come primarily from improved AI, sharpening photos by blurring the lines between the lenses, teaming them together to achieve more than any one could accomplish alone.

And, of course, for the specs and model numbers to climb higher.

USA TODAY columnist Mike Feibus is president and principal analyst of FeibusTech, a Scottsdale, Arizona, market research and consulting firm, and producer of the Privacy Now interview series on YouTube. Reach him at [email protected] Follow him on Twitter @MikeFeibus.

Get a closer look at Samsung’s Galaxy Z Flip, as it tests the waters of foldable smartphones.

Trump Says He Plans To Ban TikTok From The US

The Price of Bad Polling

[ad_1] The 2020 polling autopsies are still being written, and there are many un…

TikTok Removing Videos Of People Getting High On Nitrous Oxide