People seeking to change up the social distancing routine need not look any further than an age-old past time.

YouTuber and budding quarantine bird enthusiast Mark Rober failed in his quest to find a bird feeder capable of stopping squirrels from breaking into the bird seed.

So he created an ingenious eight-part “American Ninja Warrior”-style obstacle course for squirrels to protect his bird feeder instead. And filmed his efforts in a now-viral video.

The squirrel aerobatic proficiency on display proved to Rober, a former NASA and Apple engineer, that these common tree-scaling rodents can fly in uncommon ways.

“This course was extremely challenging,” Rober says in the video posted Sunday which now has more than 20 million views. “But I will admit, in hindsight, that I completely underestimated my adversary.”

Bird-watching in quarantine: How I turned my lonely feeder into a bird hotspot

Rober started the project eight weeks ago when, “completely bored,” he took to birdwatching in his Bay Area, California backyard. When the squirrels brilliantly and acrobatically broke into even the most anti-squirrel feeding device, he let the Squirrel Games begin.

After constructing the challenges in his backyard with a friend, Rober woke up at 6 a.m. each morning (prime squirrel time) to photograph the proceedings with his long lens camera, while also capturing moments with 24/7 streaming cameras set around the yard. 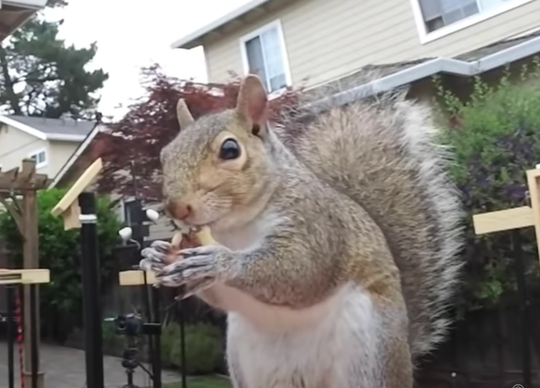 After Hollywood-style jumps, displays of squirrel cunning and dramatic falls (“they are amazing like cats and always land on their feet”), the four squirrels mastered the course. Each could nail it in less than 40 seconds and enjoy the walnuts (and the bird feeder).

Rober says he took the course down after a month, replacing it with a special squirrel picnic table, which releases walnuts to his regular contestants “to remind them of our good times together.” 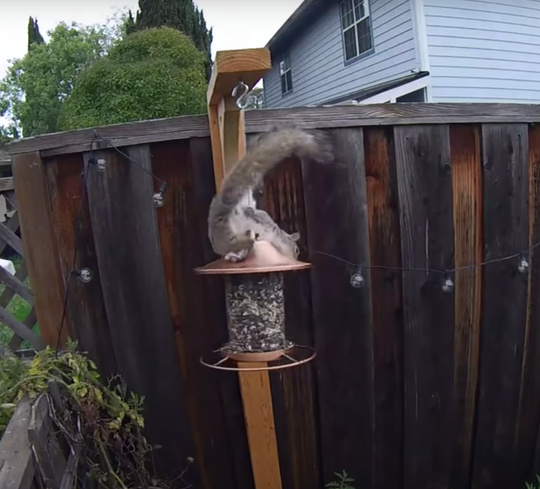 “This is when I really started getting an appreciation of what they are capable of,” said Rober of his birdseed stealing squirrels. (Photo: Mark Rober/YouTube)

“When I started this two-month adventure trying to birdwatch, I had no idea I’d enjoy squirrel-watching so much more,” Rober says in the video. “Of all the animals, I can definitively say that now squirrels are my absolute favorite.”

“They are kind of adorable, incredibly crafty, curious by nature, athletic and persistent,” he says.

In an email to USA TODAY, Rober say his video has made an impact on people’s perceptions of squirrels and beyond.

“People realized that even though they see squirrels all the time they had no idea how freaking amazing they are,” he wrote.

“My favorite feeling is when I get the sense that I’ve moved the needle in someway with people.  Seems like there’s just so much negativity from all angles right now and so I’m happy to serve as a reminder that there’s a lot of positivity and magic still left in the world,” Rober writes. “We just (need to) stop and pay attention to the right parts.”

Can You Correctly Spell These Commonly Misspelled Celebrity Names?

[ad_1] Can You Correctly Spell These Commonly Misspelled Celebrity Names? back t…