Everyone took notice when Adele was announced as host, but not musical guest, for this week’s “Saturday Night Live,” but she still managed to deliver some of her greatest hits in a parody of ABC’s “The Bachelor.”

The sketch was the biggest highlight of a bravura performance for someone known for music, not comedy. She appeared in most of the skits, finally breaking character and laughing in an African tourism board ad with Kate McKinnon. At one point, she crossed her eyes to avoid cracking up, eventually just doubling over in laughter. We can forgive her; this is not her main gig.

In her sweet, funny monologue, Adele addressed matters relating to her “SNL” appearance and to her weight loss.

“I know there’s been a lot of chatter about me just being the host. I’ve seen all of that. Like, why isn’t she the musical guest?” she said. “There’s a couple of reasons. My album’s not finished and I’m also too scared to do both. I’d rather just put on some wigs … have a glass of wine or six and just see what happens.”

As for her changed appearance, the British singer joked: “I know I look really, really different since you last saw me, but actually because of all the COVID restrictions and the travel bans, I had to travel light and only bring half of me. And this is the half I chose.”

In “The Bachelor” episode, the singing superstar, radiant in a black evening gown, played herself as a contestant competing for the affections of Ben K. (Beck Bennett) against a field of younger women who all seemed to be named Hannah.

“I’m Adele Atkins. I’m 32. You may know me for being the singer Adele. I’m here because I had a lot of heartbreak in life, first at 19, then kind of famously at 21 and then ever more famously at 25,” she said, introducing herself to viewers. “I have a really good feeling about Ben K. I can already tell he’s going to be the next love of my life.”

However, when Ben offered the first-impression rose to Hannah C., Adele, clearly not understanding the format, thought she had lost. Her face grew serious, she looked at the camera, the music rose and she broke into “Someone Like You.”

“I heard that you’re settled down, that you found a girl and you’re married now,” she sang in a spotlight that appeared out of nowhere, before Ben interrupted and said he wasn’t married to Hannah.

The emotionally needy Adele wasn’t listening. Later, during a one-on-one chat with Ben, the spotlight and music returned as she started sang a line from another hit, “I guess this reminds me of when we were young.”

When Ben was enjoying some alone time with another contestant, Adele returned with a rendition of “Hello,” this time in sepia tone.

She finally agreed to leave them alone, but she didn’t. She started singing again from the nearby bushes. 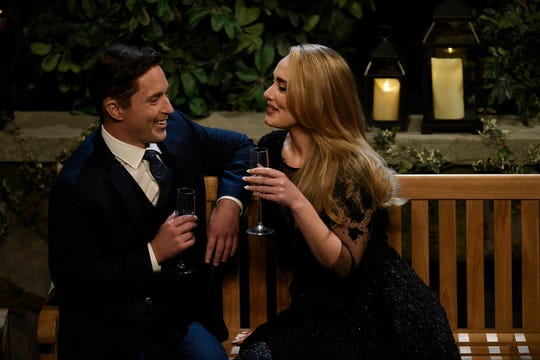 Later, speaking to the camera, Adele said she realized she was coming on too strong and had decided to play it “chill and cool.”

That didn’t last long. After she told Ben he could talk to the other women, another contestant came up to chat. A threatening Adele squeezed and crushed her own wine glass, the house lights were replaced by red back-lighting, a fitting color as she sang, “There’s a fire starting in my heart” (“Rolling in the Deep”). 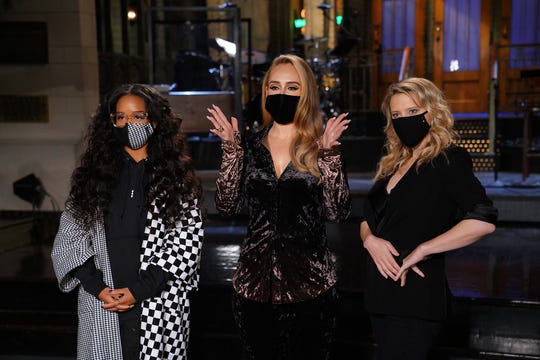 Finally, Ben told Adele she had to leave the mansion. “I don’t know if I’d call this a mansion,” the superstar said. “I will now leave and I will go quietly, I promise. There will be no more drama for me.”

Don’t worry. She came back to the delight of Ben and the other “Bachelor” contestants and sang more of “Someone Like You,” walking out into a studio audience filled with delighted essential workers.

After bringing the house down, she announced her next reality TV appearance: “Thank you, everyone. Catch me next week on ‘Love Island.’ “

Bradley Cooper On Why Award Shows Are “Meaningless”