Critically acclaimed “Mom” closes shop May 6 after eight seasons, and “NCIS: New Orleans,” one of three “NCIS” shows currently on the air, finishes its seven-season run on May 16, CBS said Wednesday. (A new “NCIS” spinoff set in Hawaii is being developed.

The conclusion of “Mom” comes just one season after the departure of Anna Faris, who played half of a mother-daughter duo – with Oscar winner Allison Janney as her mom – at the center of a series that has found humor, balanced by serious moments, in stories exploring addiction and recovery. Faris said she was leaving to pursue other opportunities.

Over the seasons, the series, set in northern California wine country, evolved into a story of strong female friendship focused on members of a 12-step group – played by Janney, Faris, Jaime Pressly, Mimi Kennedy, Beth Hall and, in more recent seasons, Kristen Johnston. “Mom” dealt with Faris’ departure by having her character, Christy, head to Washington, D.C., to study law.

Anna Faris, left, and Allison Janney played the mother-daughter duo at the center of CBS comedy “Mom” until Faris left after Season 7 in 2020. “Mom” will come to an end after eight seasons in May. (Photo: Sonja Flemming, CBS)

Janney said Faris’ absence has been noticeable during an appearance on “The Ellen DeGeneres Show” on Tuesday. “Yeah, it was very odd and she’s very missed.”

However, she expressed hope for more “Mom”: “We’re just happy that (Faris is) doing what she wants to do now, and we’re happy even more so that we’re able to still tell these stories about these great women in recovery.”

In an October interview with USA TODAY, Lorre called Faris’ departure an “enormous loss” but said “Mom” could absorb the dramatic change.

“The show was very much built around her and Allison. For her to step out was a big move to cope with. but we have an extraordinary ensemble led by Allison in a show about women in recovery. Let’s continue to tell the stories of a wonderful group of people we’d come to know and care about,” he said.

Lorre, along with fellow executive producers Gemma Baker and Nick Bakay, issued a statement about the show soon coming to an end: “For the past eight years, we’ve had the great honor to bring these wonderful characters to life, sharing their struggles and triumphs with millions of viewers every week. From the beginning, we set out to tell stories about recovery from alcoholism and addiction that are rarely portrayed in a network comedy series” 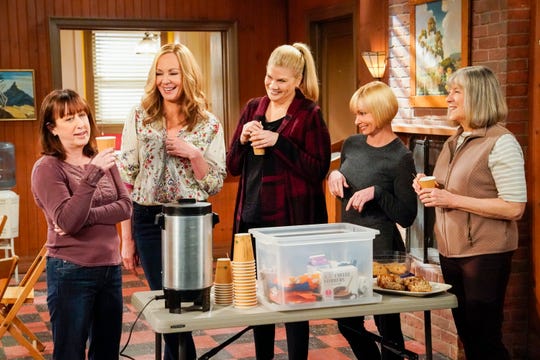 Other cast members expressed sadness, with one even lending support to fans’ effort to reverse the cancellation.

Johnston called the news “a huge bummer” in a Twitter post. “This show has been such a total joy & honor to be a part of. It’s been life-changing for me to be on a show that’s about recovery & women supporting each other thru thick & thin. Plus, ‘Mom’ has the BEST fans ever.”

Such a huge bummer. This show has been such a total joy & honor to be a part of. It’s been life-changing for me to be on a show that’s about recovery & women supporting each other thru thick & thin.
Plus, ‘Mom’ has the BEST fans ever. 💔 https://t.co/Ko5T4RsHYT

Kennedy boosted a Change.org campaign to save the show that had received more than 3,000 signatures by early Thursday afternoon.

“Look what you, the fans did!” she wrote on Instagram. “This came from you and I love what you wrote. Corporate decisions are made in secret and the creative community & audience don’t know why things happen. I have no clue. But the audience has a voice too and shouldn’t be ignored. So if MOM viewers want to say this- I’m happy to amplify their voices!”

“Mom” did not come close to the ratings of earlier Lorre hit “The Big Bang Theory,” but it grew into a solid ratings performer over the years, and CBS says it surpassed every competing comedy over the last three seasons. It eventually became the anchor for a successful Thursday night comedy block.

“Mom” began with a broader focus, with Faris’ Christy, a newly sober single mother of two, working as a waitress in a fancy restaurant when her estranged mother, Bonnie (Janney), also a recovering addict, re-enters her life. Over the years, the show’s stories became more about the women in the recovery group, with resuscitation and repair of Bonnie and Christy’s relationship a continuing theme. William Fichtner joined the cast, playing Bonnie’s husband, Adam.

Over its run, the show, which premiered in 2013, earned 10 Emmy nominations and two wins, both acting prizes for Janney.

“Sad to end our love affair with this phenomenal city but so grateful for all the friends we made along the way,” Bakula said in a statement. “I will miss the music. Big thank you to CBS for seven years.”

Butterfly’s wings are clipped in competition

The Degrassi The Next Generation Pilot Was Super Dark