President Trump spoke about Iran in an interview on Fox. Trump emphasized that he isn’t looking for war, but he just doesn’t want Iran to have nuclear weapons.

President Donald Trump withdrew the U.S. from the accord in 2018.

Initially, there were conflicting reports over whether Fakhrizadeh survived the assault. It took place as the car he was traveling in east of Iran’s capital came under machine gunfire, according to Iranian state TV and the country’s semi-official Fars news agency.

Witnesses also heard the sound of an explosion. A wounded Fakhrizadeh was later taken to a local hospital along with several of his bodyguards, the agency said.

There were no immediate claims of responsibility. 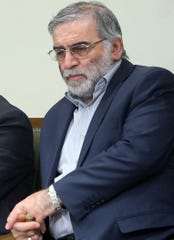 Iranian state TV said more information would be provided later. A statement by Iran’s armed forces said Fakhrizadeh died from his injuries while in the hospital.

Israel’s government declined to immediately comment on the reports about Fakhrizadeh, whom Israeli diplomats often refer to as Iran’s “father of the bomb.” During a news conference, Netanyahu once said of Fakhrizadeh: “Remember that name.”

Trump abroad: His fiercest critics say he may have gotten some world affairs right

Israel has long been suspected of carrying out targeted killings of Iranian nuclear scientists nearly a decade ago to halt its suspected military nuclear program.

The nuclear pact Trump abandoned was negotiated under President Barack Obama in 2015 and some Iran experts, former diplomats and even senior Iranian officials speculated that Fakhrizadeh’s killing could be part of a concerted attempt to sabotage any fresh diplomacy between Iran and the incoming Biden administration.

Biden has said he wants to revive the accord, under which Iran agreed to curbs on its nuclear program in exchange for relief from international sanctions.

“It’s not unlikely that this targeted killing was part of efforts to prevent the Biden administration from reviving diplomacy with (Iran) and going back to the nuclear agreement,” said Carl Bildt, Sweden’s former prime minister, on Twitter.

Hossein Dehghan, a senior military adviser to Iran’s Supreme Leader Ali Khamenei, also took to Twitter to offer a theory. “In the last days of the political life of their ally (Trump) … (Israel) seeks to intensify pressure on Iran and create a full-blown war,” he said.

John Brennan, who served as CIA director during the Obama administration, slammed Fakhrizadeh’s killing as “a criminal act and highly reckless” and urged Iranian leaders to refrain from retaliating.

“It risks lethal retaliation & a new round of regional conflict,” Brennen wrote on Twitter. “Iranian leaders would be wise to wait for the return of responsible American leadership on the global stage & to resist the urge to respond against perceived culprits.”

There is no indication the White House knew beforehand of the assassination plot.

Requests for comment from the U.S. National Security Council, U.S. State Department and the U.S. Department of Defense were declined. A spokesman for Biden’s transition team also declined to comment.

But Trump on Friday did retweet a newspaper article about Fakhrizadeh’s assassination along with some comments by an Israel writer named Yossi Meman who claimed Fakhrizadeh’s death “is a major psychological and professional blow for Iran.”

Iran has vowed to take revenge for Soleimani’s killing. The one-year anniversary of his death is in January.

However, so far Iran has exercised relative restraint.

It has remained in the nuclear pact with world powers – with loosened compliance – despite the U.S. withdrawal and maintained it is theoretically open to resuming the deal with U.S. participation.

Fakhrizadeh was a Brigadier General in Iran’s Islamic Revolutionary Guard Corps. He led Iran’s so-called “Amad,” or “Hope,” program. Israel has alleged it was a military operation to probe the feasibility of building a nuclear weapon in Iran. Tehran long has maintained its nuclear program is peaceful.

The IAEA concluded earlier this month that Iran’s uranium stockpile is now 12 times larger than permitted under the nuclear accord that Trump withdrew from.

Mark Dubowitz, the chief executive of Foundation for Defense of Democracies, a Washington, D.C.-based think tank that espouses a hardline on Iran, said Fakhrizadeh was “the most critical player in Iran’s nuclear efforts” and his removal has “enormous implications for whether Iran can continue to move forward without his know-how.”

Dubowitz said the attack “certainly has the hallmarks of an Israeli operation” and noted that Fakhrizadeh had been on Israel’s target list for many years.

He said it’s not clear if the U.S. had any role in the attack, but it’s likely the CIA at least got a heads up about the operation.

“I would imagine there was some information sharing or even more extensive cooperation,” he said, especially given the strong relationship between CIA Director Gina Haspel and her Israeli counterpart, Yossi Cohen, head of Israel’s Mossad spy agency. 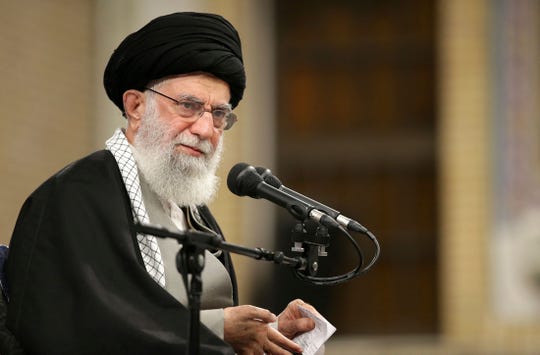 Iran’s Supreme Leader Ayatollah Ali Khamenei speaks to a group of residents of the city of Qom, Iran, on Jan. 8, 2020. (Photo: AP)