The ship was freed after dredgers vacuumed up sand and mud from its bow and 10 tugboats pushed and pulled the vessel for five days, managing to partially refloat it at dawn.

The investigation into the grounding of a massive container ship that blocked access to the Suez Canal for almost a week has turned to the black box aboard the Ever Given.

Osama Rabie, chairman of Suez Canal Authority, said an analysis of the ship’s data is underway and should provide crucial details surrounding the grounding. An initial report on the costly accident could be released this week, he said.

Rabie also repeated his claim that the grounding cost his agency and Egypt $1 billion. That does not include losses faced by owners of more than 400 ships delayed by the blockage or the losses to owners of cargo on those ships. The blockage held up an estimated $400 million per hour in international trade, according to the German insurer Allianz.

The Ever Given is docked in a canal holding lake while the investigation takes place. Rabie suggested that failure of the ship’s owners to reach an accord on damages could trigger court proceedings and delay for a year or more release of the cargo – almost 20,000, 20-foot long containers carrying goods valued at more than $3 billion.

“”We are discussing with them a peaceful resolution to the matter without resorting to the judiciary,” he said, saying Egypt must recoup costs from the work done to free the ship plus suspension of navigation in the canal.

Lawrence Brennan, who teaches maritime law at Fordham Law School, says black boxes should have data involving the ship’s engines, machinery and navigation. Other recorders probably could provide conversations from bridge, he said.

“There likely are going to be multiple cases in various national courts which have different rules that sides expect will favor their interests,” Brennan told USA TODAY.

But the ships that sat in line for days awaiting the canal’s reopening should not hold out much hope of compensation, he added.

The Suez Canal, linking the Mediterranean Sea with the Red Sea, provides passage to about 12% of the world’s cargo. More than 18,000 ships passed through the waterway last year.

The Ever Given, one of the world’s largest container ships, apparently spun in high winds while navigating a narrow section of the canal on March 23. The 1,300-foot-long, 220,000-ton ship’s bow went aground on the canal’s eastern bank, the stern on the western bank. It took six days of dredging, favorable tides and a dozen tugboats pulling to free the vessel.

The ship is a multinational concern – owned by a Japanese firm, operated by a Taiwanese shipper, flagged in Panama and operated by an Indian crew.

Evergreen has denied responsibility for any financial losses caused by the incident. Company president Eric Hseieh said agreements signed with customers do not guarantee arrival times for shipments.

Shoei Kisen also declared “general average,” a maritime law principle providing that if an intentional sacrifice is made for the safety of the individuals and cargo, all parties involved proportionally share in the losses. The idea is to keep the crew from wasting time in an emergency deciding whose cargo should be sacrificed.

The general average adjuster uses a complicated formula to determine which losses qualify for general average, the total costs of the incident and the amount each party owes. Final settlement of general average can take months or even years.

The firm WK Webster said it has instructed an expert marine surveyor to investigate the cause of the grounding of the vessel “so that we may evaluate the merits of any potential defenses to contribution in (general average) that may be available to cargo interests.”

Suez Canal fallout: What caused the Ever Given’s grounding is an expensive question 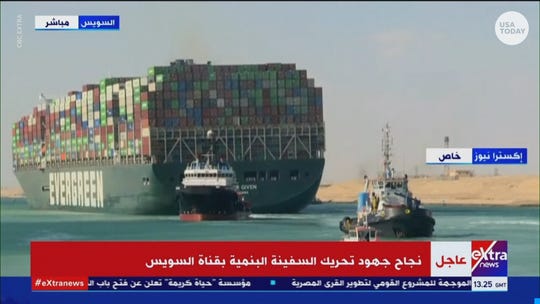 The skyscraper-sized container ship, Ever Given, is free and on the move after being stuck in the Suez Canal for nearly a week. (Photo: CBC EXTRA)

A Bad Day for the Presidency