Lebanese activist Ralph Baydou walks through the devastation in Beirut, Lebanon as civilians help to clean up after the explosion.

Lebanese President Michel Aoun said Friday there are two possible causes of Tuesday’s explosion that killed nearly 150 people – either negligence or “external intervention” by a missile or bomb.

It’s believed that the blast occurred when a fire ignited 2,750 tons of ammonium nitrate stored at the port. The cause of the initial fire is unknown.

Aoun said Friday that he asked France for satellite images to see if there were warplanes or missiles in the air at the time of the blast. This differs from the main narrative of recent days, which focused on investigating Lebanese port and customs officials for negligence.

IN-DEPTH: Before and after images of the Beirut blast site

Aoun told journalists that he received information weeks ago about the dangerous material and “immediately ordered” military and security officials to take care of it. Aoun’s comments were the most senior confirmation that top politicians had been aware of the stockpile.

“The material had been there for seven years, since 2013. It has been there, and they said it is dangerous, and I am not responsible,” said Aoun, who took office in 2016. 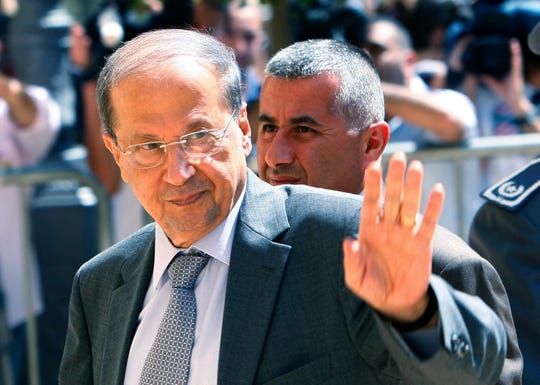 In this Thursday, June 25, 2009, file photo, Lebanese Christian leader lawmaker Michel Aoun gestures as he arrives at the Parliament for the election of the house speaker in Beirut, Lebanon (Photo: Hussein Malla, AP)

At least 10 times over the past six years, authorities from Lebanon’s customs, military, security agencies and judiciary raised alarm that a massive stockpile of explosive chemicals was being kept with almost no safeguard at the port in the heart of Beirut, newly surfaced documents show, according to the Associated Press.

Aoun said the Lebanese government’s investigation into the cause of the explosion is concentrating on 20 people. Port officials have been put under house arrest.

Misinformation on social media blamed Israel, but Israeli officials have denied any involvement and have offered aid to Lebanon. 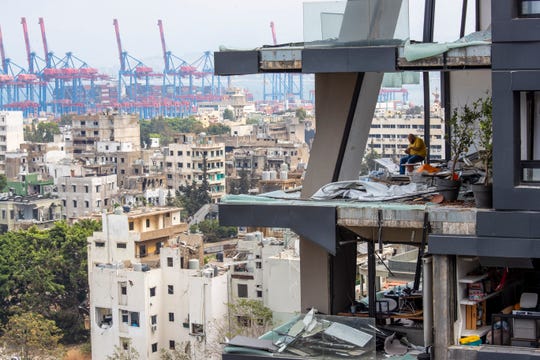 A man sits between debris inside his house damaged by Tuesday’s explosion in the seaport of Beirut, Lebanon, on Aug. 7, 2020. The U.N. human rights office is calling for an independent investigation into the deadly explosion, insisting “victims’ calls for accountability must be heard.” (Photo: Hassan Ammar, AP)

France’s No. 2 forensic police official, Dominique Abbenanti, said Friday the explosion “appears to be an accident” but that it’s too early to know. France, which has close ties to its former colony, sent 22 investigators.

French police could question witnesses or suspects, said Eric Berot, chief of a unit involved in the investigation. For now, the French team is dividing up zones to cover with their Lebanese counterparts and will use drones to study the area.

“The zone is enormous. It’s a titanic job,” Berot said. The investigation is complicated by  “the Lebanese situation,” he said, referring to the political and economic crisis.

Earlier this week, President Donald Trump called it a “terrible attack” based on the suspicions of U.S. generals he did not name. However, Defense Secretary Mark Esper later said it was likely an accident.

Tuesday’s explosion had the force of at least 500 tons of TNT, according to a U.S. government source, who was not authorized to speak publicly. The estimate was based on the widespread destruction, said the source, who has experience with military explosives.

REPORTER IN BEIRUT:Forced to bury a dog that made ‘dystopia more bearable’

The blast caused carnage over a 6-mile radius and was felt more than 100 miles away. 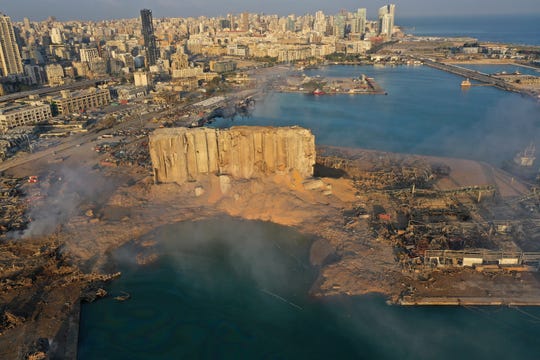 A drone photograph on Aug. 5, 2020 shows the scene of an explosion that hit the seaport of Beirut, Lebanon. A massive explosion rocked Beirut on Tuesday, flattening much of the city’s port, damaging buildings across the capital and sending a giant mushroom cloud into the sky. (Photo: Hussein Malla, AP)

Ammonium nitrate has been linked to past industrial accidents, including explosions at a fertilizer plant in Texas in 2013, a Chinese port in 2015 and many others.

COULD IT HAPPEN HERE?US ports safer but not immune to disaster

It was also used in the Oklahoma City bombing in 1995, when a truck bomb containing 2.4 tons of fertilizer and fuel oil killed 168 people in a federal building. It’s a common fertilizer that’s highly explosive.

Storage is critical. Left unchecked, ammonium nitrate can be contaminated by industrial elements such as fuel oil. The chemical can also decompose on its own, generating heat.

An explosion of ammonium nitrate releases gases, including nitrogen dioxide, which is orange or reddish in color.

Beirut disaster videos show a gray cloud rising from the port, in what appears to be a large industrial fire. A building explodes, creating an orange-reddish cloud, followed closely by a white mushroom cloud as a shock wave hits.

Relatives of Lebanese army lieutenant Ayman Noureddine, who was killed by Tuesday’s explosion that hit the seaport of Beirut, mourn over his coffin during his funeral procession, in Numeiriyeh village, south Lebanon, Friday, Aug. 7, 2020. Rescue teams were still searching the rubble of Beirut’s port for bodies on Friday, nearly three days after a massive explosion sent a wave of destruction through Lebanon’s capital. (Photo: Mohammed Zaatari, AP)

The government estimated 300,000 people – more than 12% of Beirut’s population – had to leave homes damaged by the blast. Many have since returned or are staying with loved ones. Officials estimate the explosion caused $10 billion to $15 billion in losses.

On Friday, rescuers continued pulling bodies from the wreckage.

“Our experience shows that we can find people alive until up to 72, 75 or 80 hours after an explosion or an earthquake, so for now we are still in time and we cling on to this hope,” said Col. Vincent Tissier, head of the French rescue team.

In addition to providing and distributing food, the HOPE worldwide’s Lebanon branch is preparing to renovate and rebuild homes that suffered damaged from the explosion.

“This is as much as we can (do) as an NGO,” Mofid Tohme, the president of HOPE Worldwide’s Lebanese branch, said.

Thousands of Lebanese citizens filled the streets in the days after the blast, bringing their own brooms, shovels and other materials to help clean up the streets of Beirut, according to Lebanese activist Ralph Baydou.

“This is what also what is keeping the state alive,” Baydou said. “Us, the Lebanese citizens stepping in instead of the State.”

A woman gave birth to a boy in near darkness at a hospital in Beirut, Lebanon hospital moments after an explosion rocked the city on August 4.

[ad_1] CLOSE With coronavirus sweeping across the world, it’s easy to forg…

Foreign Observers Fear For US Democracy Over Trump

Now They Tell Us